From the eye to the brain: neurophysiology notions of visual function

Vision is our most used sense. The eye mobilizes 85% of all the energy used by the 5 senses and more than 50% of sensory information received by the brain are visual. In visual perception, the perceived image is a creation of our brain. Hence the importance of the relationship between the eye and the brain, where approximately 30% of the cerebral cortex intervenes to interpret what the eye sees. The brain creates the images we see: details, colors, embossed and even though we see only part of an object, the brain can recognize what object it is by reconstructing the missing part. 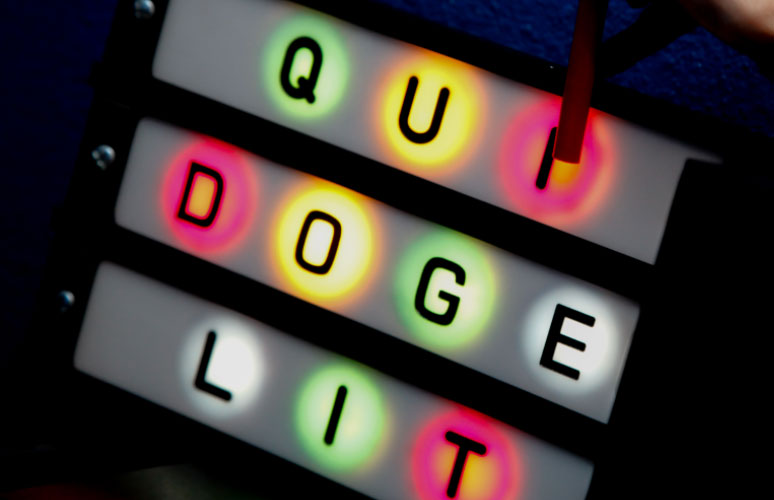 The vision from the eye to the brain

The human eye is sensitive via its retina to photons of visible light (between 400 and 700 nanometers) that stimulate the photoreceptor cells, the rods and cones. The 3 types of cones (6.5 million), sensitive to color vision (blue, green and red) are at the center of the retina (fovea) and in the peripheral area are rods (120 million) sensitive to the intensity light (black and white). Thus the light energy is converted into electrical signals to the ganglion cell axons which form the optic nerve starting from the retina.

It is interesting to note in the psycho-neuro-sensory training Quertant that everyone’s eyes may have very large inter-individual variations. For example, the density of cones varies from 1 to 4 times according to the subjects and the number of ganglion cells varies from one to two different individuals.

The two optic nerves extending from each eye converge at the optic chiasm, instead of decussation (crossing) of some axons so that all visual information from the left visual field are first processed by the right hemisphere and vice versa.

Finally the optical signal travels via the lateral geniculate nucleus (LGN), a core part of the thalamus, which then forwards the information to the primary visual cortex V1, located at the occipital cortex.

The primary cortical area V1 receives the raw visual information, and the “construction” of the image is carried out by different connections integrating different brain areas. Nearly thirty different cortical areas contributing to visual perception have been discovered. Primary areas (V1) and secondary (V2) are surrounded by many other tertiary or associative visual areas: V3, V4, V5 (or MT), V6, but also other areas such as the fusiform cortex for face recognition and ‘motor area the “frontal eye field”.

The ventral cortical pathway occipitotemporal connections is preferentially involved in processing and identifying objects and their attributes (shape, color, texture …) and simplifying processes the question: “what object?”

The dorsal cortical pathway is preferentially involved in processing spatial data and movement, and rather answers the question: “where is the object?”.

The information collected (shape, size, color, spatial position, texture, depth perception, perspective, movement of objects, individuals) are interpreted in light of the experience of each.

While our vision is not impaired, cerebral analysis can distort our perception of the environment, thus causing visual illusions (eg optical illusion*, cognitive distortion). The study of these illusions is a vast field of neuroscience research. 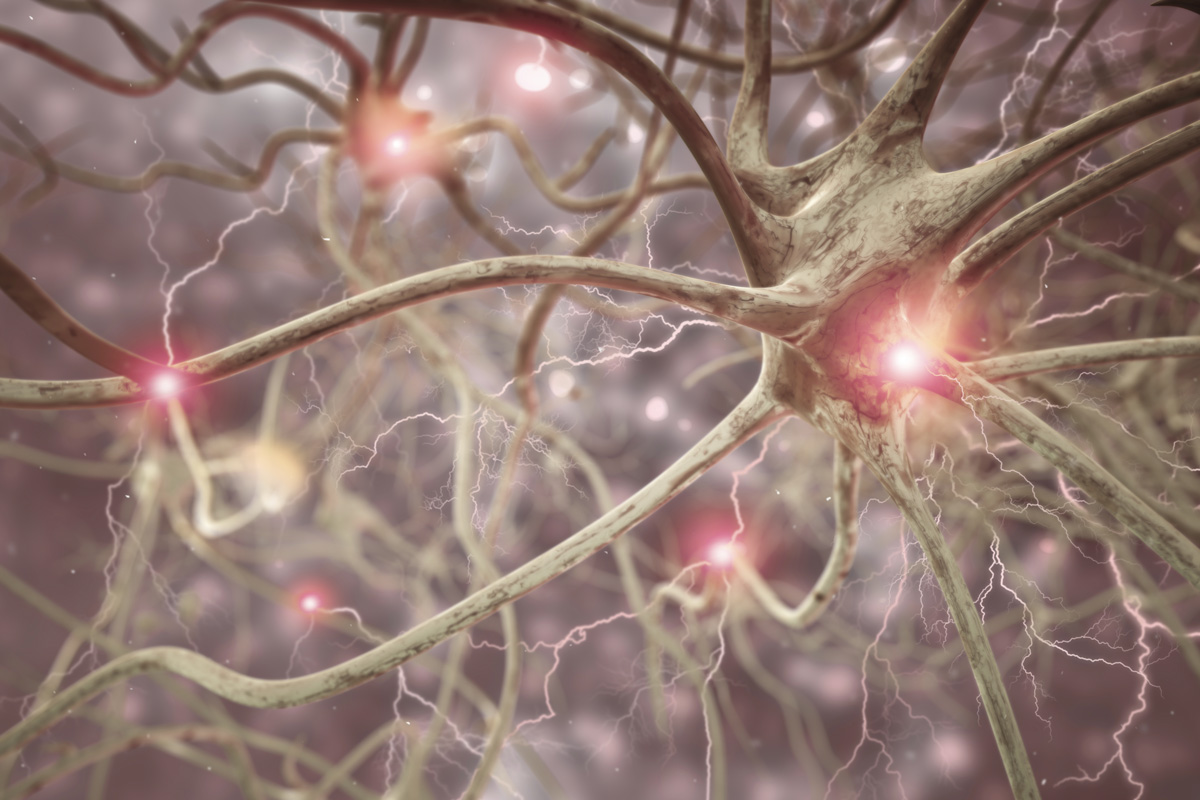 Visual perception is a functioning LOOP visual sensory pathways that we have seen and a oculomotor pathways from the brain to the eye. These loops are constantly revisited during the neuro-sensory training Quertant by the plasticity of different brain connections related to the visual system of the person.

Oculomotor systems coordinate the mobility and coordination of both eyes and head associated with many visual reflexes.

Eye movements, order given consciously or not, are due to 3 pairs of extra-ocular muscles, antagonistic effects and play a specific role in the adjustment of the position of the eyes. They are responsible for eye movements along three axes:

– twisting motion (top of the eye to the nose or away)

The six extraocular muscles are under the control of three pairs of cranial nerves. The oculomotor nerve (III) and the trochlear nerve (IV), whose nuclei are in the midbrain. Part III oculomotor nerve provides parasympathetic innervation of the intrinsic muscles of the sphincter muscle of the iris and ciliary (Edinger-Westphal nuclei). The abducens nerve (VI), whose nuclei reside at the bridge.

The pairs of muscles innervated by the oculomotor nerve, adds the pair of levator muscles of the eyelid.

The vestibular-ocular and optokinetic movements used to stare at a target when the head moves, these are image stabilization movements. The movements of saccades, tracking or convergence have, in contrast, serves to keep the fovea on a target even when it moves, it is guidance eye movements.

Different regions located in different parts of the brain (brainstem, midbrain, diencephalon and cerebral cortex) involved in the regulation of these various systems. The main ones are:

– the colliculus in the midbrain which coordinates the movements of the head and eyes. 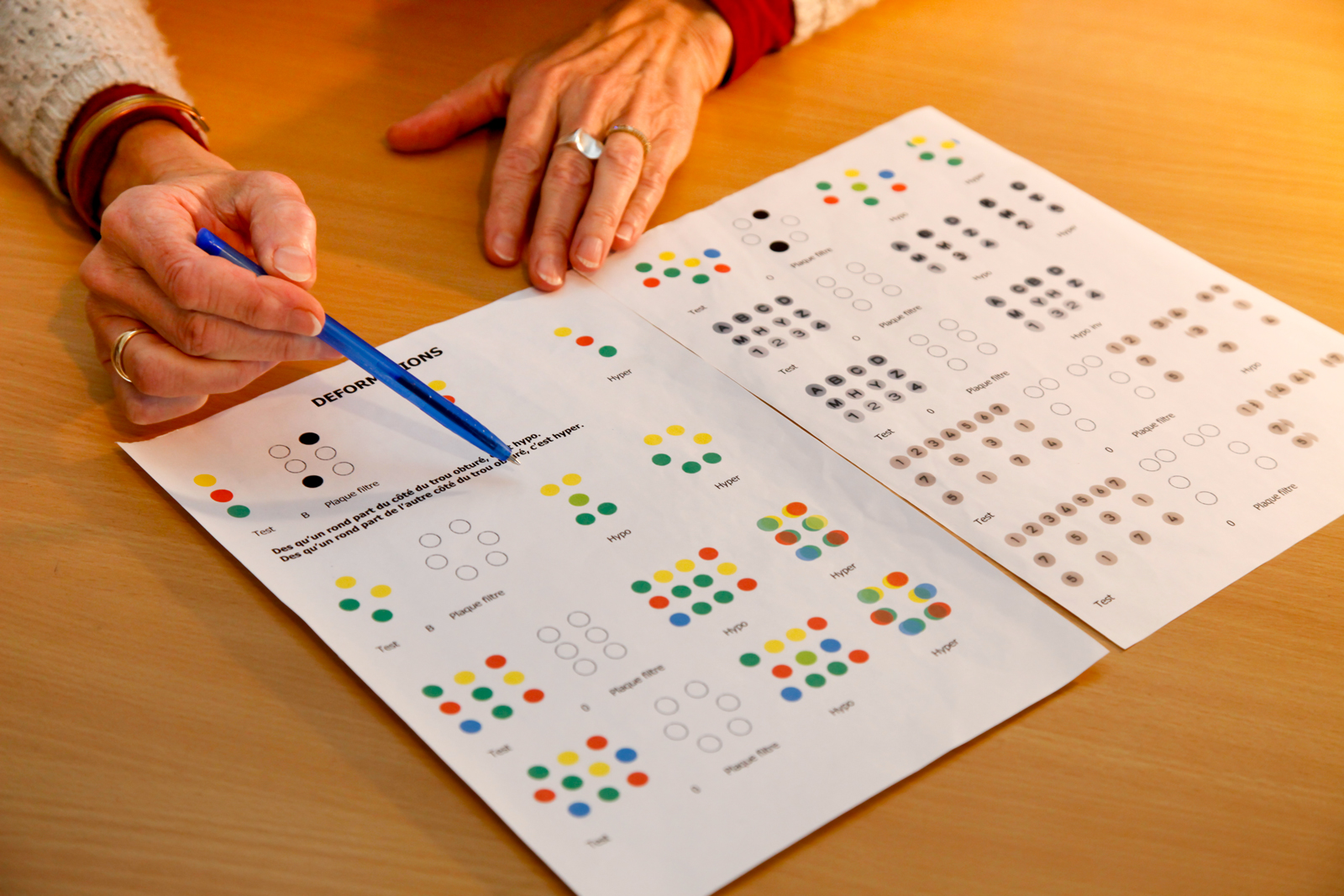 The eye and the hypothalamus, endocrine and limbic center of the brain

The retino-hypothalamic pathway connects some ganglion cells of the retina to the suprachiasmatic nuclei of the hypothalamus. These cores connection with the pineal gland (epiphysis) regulates the circadian rhythm with other hypothalamic nuclei, the autonomous regions of the cord and the sympathetic ganglia. They synchronize the circadian rhythm of the body. This affects the homeostasis of many aspects of our physiology: daily variations of temperature, hormone secretions, and sleep sleep, but breathing, circulation, digestion ….

Georges Quertant formalized his findings in the context of biology, anatomy, physiology… his time in a major work of synthesis as evidenced by the numerous archives owned by SCP-CPS Quertant. He described the various intra-brain systems involved in the vision and these data older than 70 years are updated below in the light of current knowledge. The following summarizes the different brain systems mobilized in person training practicing psycho-neuro-sensory Quertant:

Posture in combination and modulation of the motor system called “extrapyramidal” unconscious.

Posture and vestibular system (relation of Life according to Quertant). 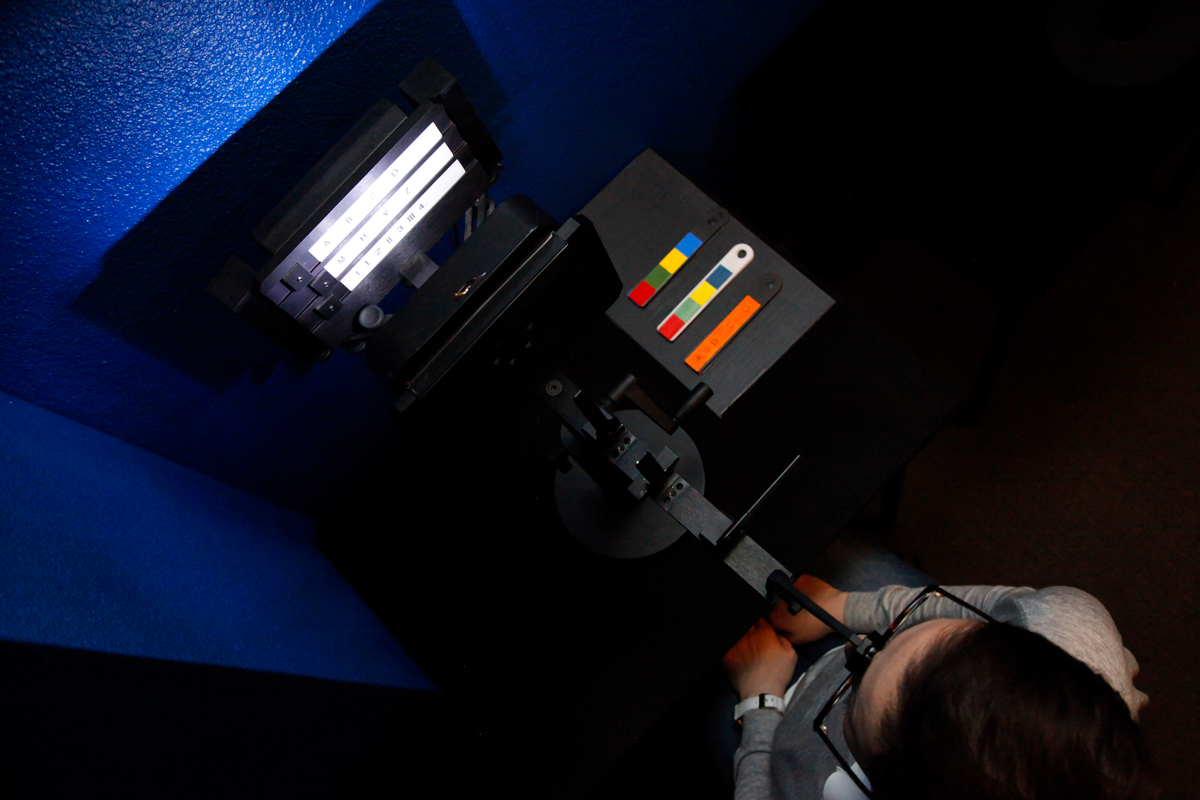 From the eye to the brain in Quertant tests

Georges Quertant has correlated the regulations of the central nervous system with the infinitesimal movements of the human body whose eye movements are a feature.

While in simultaneous vision (monocular), each eye sees a different object at the same time.

The objective of the training is to get the alignment of the visual axis of each eye in monocular and binocular vision in both eyes in the different proposed tests.

The complexity of the testing increases after each measurement practice and depending on the receptivity of practitioners.

The different types of stimuli used in these tests: round pigment colors, black letters on white background, spectral, letters on an orange background, figures … and will allow to solicit the vision and the Central Nervous System in different ways. 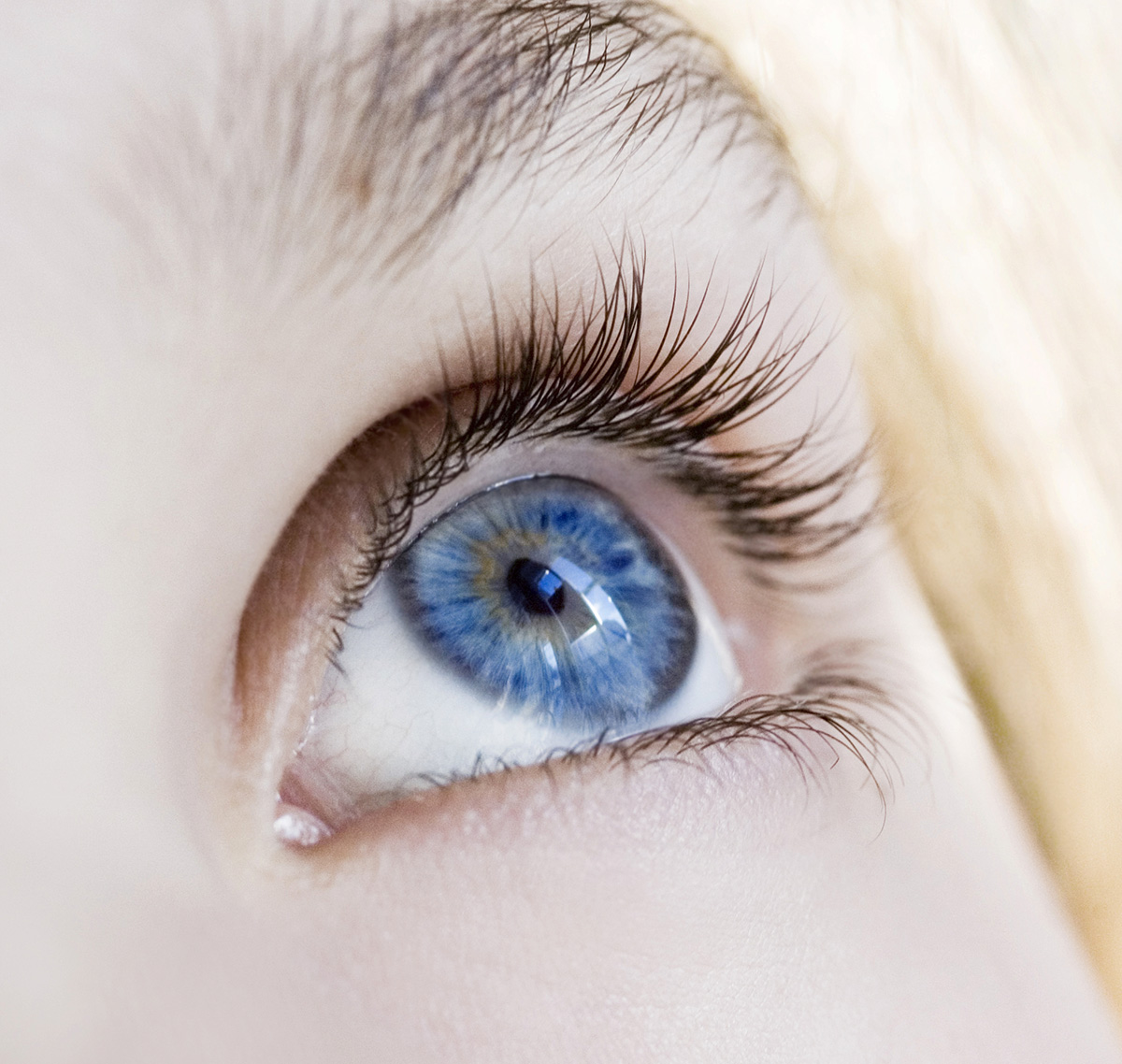 As a music teacher in a High School, George Quertant first helped a large number of children by correcting their learning difficulties. His method is revolutionary in the sense that he realized that subtle visual disturbances predominantly sensorimotor seen in children (but also adults) reflect psychosomatic disorders, emotional (stress) or cognitive behavioral (learning ) of the central nervous system.

These plasticity essentially affect the circuitry of many brain pathways involved in vision (axons and synapses), which involves about 30% of the whole brain. Just knowing that all brain axonal connections is estimated at about 176 000 km in the human brain!!

And our relationship with the environment that Georges Quertant called “relationship of life” is by the strong interaction brain-body (body-mind theory) whose subtle disorders have long been regarded as psychosomatic. Currently, a major new scientific discipline has emerged called Psycho-Neuro-Endocrine-Immunology, studying the continual interactions between different brain regions and our bodies, between sensations, hormonal secretions, emotions, cognitive and defenses of organization (immunology) for the maintenance of good homeostasis of the nervous system. In the training psycho-neuro-sensory Quertant, hypothalamus through its endocrine functions, vegetative (sympathetic), limbic (affect) and visual is the cornerstone of this relationship vision / brain / body.

Of course, it’s all brain plasticity, sensory-motor stimuli, a vegetative homeostasis, emotional and functional at different levels of the brain and body, which will improve symptoms.

Georges Quertant in his genius needed rehabilitation in the dark. This allows shadows to revisit our cortical engramed memories via the hippocampus. As described in sleep and / or meditation in the scientific data.